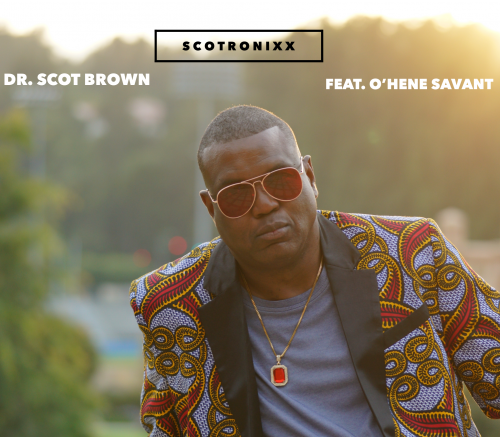 In this new entry in our ‘Diamonds In The Rough’ category, we want to introduce you to upcoming artist Dr. Scot Brown and his brand new single titled “Scotronixx” featuring Ohene Savant.

Listen to the song and check out an interview with the artist below:

What was your inspiration behind the song “Scotronixx”?

That song was a bit of a magic trick.  I had written a jazzy instrumental track with a walking bass line on top of a sweet chord patch.  I played some other synthesizer lines around it and overdubbed other bass licks — similar to the way a rhythm guitar part would come in and out.  It had a jazzy hip hop vibe reminiscent of what I felt when I heard Gang Starr back in the 1990s.  I really thought of it as an instrumental until Ohene Savant came into the picture….

What is your relationship with Ohene Savant? How did this collaboration come together?

I met Ohene Savant by way of legendary artist, producer, songwriter James Mtume — who is a mentor to both of us.  Savant is a musical genius who plays multiple instruments, produces and raps on an incredibly high level.   He can do what three or four people do.  He’s held the line as an indie artist but is well-known by the top Mcs and producers.  Well… he had come out to Los Angeles for a few days for a meeting with Dr. Dre in 2018.  The meeting happened but it was rescheduled for a different day than what was initially set up.  So, Ohene calls me and says he’s in Los Angeles with a free-day and no plans.  Now, here’s where the magic happens.  I knew Ohene coming over was an opportunity to let him hear my track so I grabbed my laptop and cued it up before going to get him and another rapper, E. Snipe. The magic trick ended up working!  I played it and Ohene got on the mic — in a makeshift studio in my living room — and started freestyling to it on the spot.  Some of the lines were literally derived from pictures hanging on my wall.  I have a framed print of Overton Loyd’s cover art of Parliament’s LP Aqua Boogie which inspired the first line of the song “I’m the artisan, listening to Parliament…”  I built the hook and concept around the phrase, “I fuse metaphysical themes with Ebonics.”  From my perspective that’s what I’m all about as an artist and educator – striving to make deep thoughts and lessons accessible.

As a music historian what made you decide to come from behind the scenes to the front with curating music?

You never know how different talents, skills, or interests can connect and stimulate creativity.  One skill can even inspire innovation in an entirely different realm.  In my case, the world of being a scholar of African American history and music, and the world of being an aspiring songwriter and producer, overlapped in ways that I could never have imagined. Along my way I discovered that my experience as a musician actually contributed to becoming a professional historian and writer.   My book Fighting for Us (2004) is about the Black Power movement of the 1960s but in one chapter I ended up incorporating voices of musicians and describing instrumental music in detailed ways that were informed by having played in a local Rochester, NY band called Radiance, during my teenage years. Likewise, my college studies and eventual experience an author and historian really helped me grow into becoming a better lyricist.  I began to do a lot more songwriting in the early 2000s–collaborating with Rick Marcel who also played in my hometown band. Marcel is a special talent who played bass and guitar on some of the signature hits in the Cash Money Records camp: “Bling Bling,” “Slow Motion,” ‘Party Like a Rock Star,” “Mrs. Officer” and many other jams — and he has performed live and toured with numerous A-list artists.  Working with him, and other mentors over the years, in the songwriting and music production woodshed took me to the point where it’s now time for the caterpillar to become a butterfly.  I wrote the music and produced a spoken word album by the legendary poet Kalamu ya Salaam — called Catfish & Yellow Grits.  Just recently my single “Last Man [Remix],” came out, and so now it’s time to for some, “Scotronixx” – also found on most digital platforms

What’s next for Dr. Scot Brown?

Music-making, teaching and scholarship are all connected in my life.   I hope to push all three forward at the same time.  I’m plan to finish an EP project by the end of the spring and continue to collaborate with like-minded vocalists and musicians.  All the while I’m writing a book on Black bands from Dayton, Ohio –Ohio Players, Slave, Lakeside, Roger Troutman & Zapp, Heatwave, Steve Arrington’s Hall of Fame, Dayton, Faze-O, Platypus, Sun and more — during the golden era when funk music thrived in the 1970s.

How are you able to pivot during this pandemic with your career and musical career thus far?

The Pandemic is taking a horrible toll on humanity. One survival mechanism available, to the fortunate among us, has been the availability of internet technologies.   I am extremely blessed to be an educator in that I have been able to make a living without putting my health at risk.   Similarly, I have been able to get together with musicians and collaborate creatively during a time when sharing the same physical space is difficult and risky.   This is possible in the current internet age due to due to email, social media, file sharing and exchanges, real time communication, digital audio workstations and the growth of online music distribution and consumption…. The ability to work with artists and listeners all over the world is phenomenal for someone like myself, who is focused primarily on recording. However, live-performing and working musicians are seriously suffering.  I have been able to navigate (for the time being) some of the mazes presented by this pandemic – as an individual– but collectively, the response to the overall the societal response to the dangers of this situation have been, and remain, unacceptable. We need to come together and advocate for artists, and all of the jobless, who must be supported during this time of severe crisis.