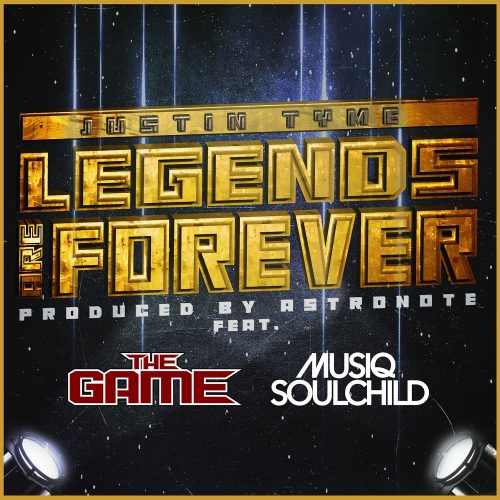 In this new entry in our ‘Diamonds In The Rough’ category, we want to introduce you to upcoming, frequently featured artist Justin Tyme and his brand new single titled “Legends Are Forever” featuring The Game and Musiq Soulchild.

The world first caught a whiff of rapper Justin Tyme back in 2007 on the timeless Classic “Get Off The Ground” among legends like Sean Price, Lil Fame of M.O.P, Snowgoons and Termanology. A few Millions YouTube views later, questions arised on, who is this wordsmith taking credits for setting up such a raw purified piece of signature 90`s Hip Hop backed up by a vivid video clip right in the epicenter of New York`s underground scene?

December 2021, Tyme has been plotting for years and finally finished a collaboration Album which shall unite elite wordsmiths across the HipHop boom bap genre.

As a next tastemaker, the team is letting off “Legends Are Forever”, featuring The Game and Musiq Soulchild over Astronote production (the next Hit Boy?), promising nothing less than a true Classic. Astronote which stands for futuristic boom bap (produced for Kendrick Lamar and more) delivered a remarkable soulful production. “Legends Are Forever” sets the tone for the upcoming Album release Iron Bars around spring 2022, which will be backed up by Hip-hop Icons like Twista, Havoc of Mobb Deep, MF DOOM, Stove God Cooks, The Game, Statik Selektah, DJ Premier and more.