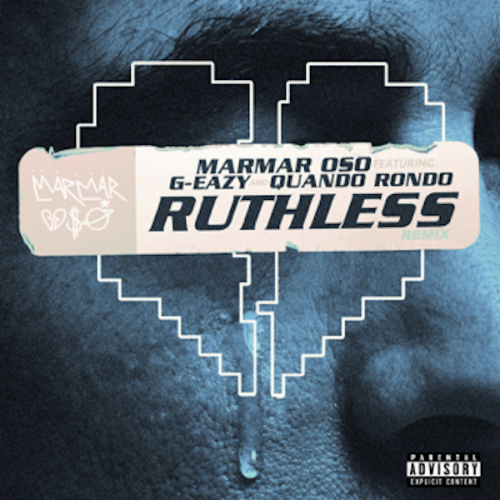 In this new entry in our ‘Diamonds In The Rough’ category, we want to introduce you to upcoming artist MarMar Oso and his brand new single titled “Ruthless” (Remix) featuring G-Eazy and Quando Rondo.

MarMar Oso’s “Ruthless (Nice Guys Always Finish Last)” original single continues to blow up attracting more and more fans from all over. With 440k units sold and over 90 million streams across all platforms, the stage has been set for the impressive “Ruthless Remix” where Oso recruits G-Eazy and Quando Rondo and drops today.

Named one of Spotify’s “United States Viral 50” and holding the spot for three months, “Ruthless” has become a global sensation that was only worthy of a star studded recreation. Similar to the original video, the video follows MarMar Oso as he reminisces about his past relationship, but now accompanied by G-Eazy and Quando Rondo’s take on their own personal experiences. The video and song retain MarMar Oso’s unique charm and vocals but the artist collaboration brings in a new but distinct sound.
The remix comes off of his upcoming album Marvin’s Room, which is set to drop on September 16th. MarMar Oso’s new project will feature other artists such as  Eric Bellinger, Kalan.FrFr and more. Marvin’s Room is available for pre-order now.
Listen below:
Share on Facebook Share
Share on TwitterTweet
Share on Pinterest Share
Share on LinkedIn Share
Share on Digg Share
Send email Mail
Print Print