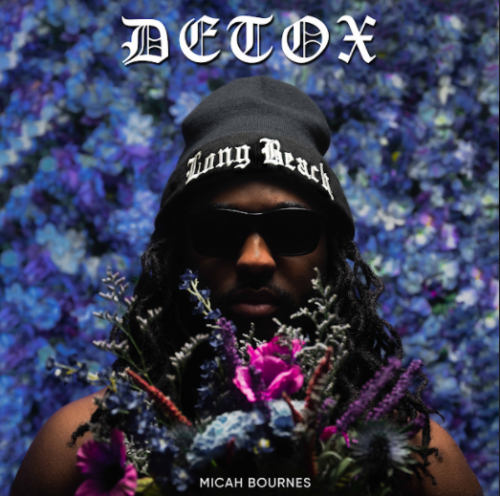 In this new entry in our ‘Diamonds In The Rough’ category, we want to introduce you to upcoming artist Micah Bournes and his brand new album titled DETOX.

DETOX is a reckoning with toxic masculinity’s specific expression in Black male culture, addressing our overcorrections to the humiliation and emasculation we face in a nation poisoned by white supremacy. The project  also celebrates healthy expressions of Black masculinity.

The album is also a nod to West Coast hip-hop. After his albums ‘The Chronic’ (’92) and ‘2001’ (’99), the legendary Dr. Dre announced a third studio album, ‘Detox’. He first mentioned the record in 2002, but he kept delaying the release date, and nearly two decades later, it’s never been released.

Micah says, “As a Black boy growing up in Long Beach, I was inspired by artists like Snoop , Dre, Nate Dogg, Warren G, DJ Quik, Ice Cube and more. It was amazing that these young Black men from hoods  in Long Beach and Compton could use their creativity to lift themselves out of poverty and influence the entire globe. People all around the world were talking, dressing and walking like the brothas from my city. As a kid, that was important for me to witness. They were courageous to express anger at issues like police brutality, especially considering their age. Ice Cube was in high school when he started writing songs for NWA. But along with their youth came ignorance in other areas.  Hip Hop did not invent sexism or violence, but it has helped to spread them throughout the Black community.”

“The title and story of Dr. Dre’s unreleased album feels like a metaphor. These artists inspired me, but they never quite gave us the detox we needed, even after many of them began living differently in their personal lives. But rap music  was also the vehicle that helped me unlearn some of these oppressive ideas. I’ve been making music for over a decade. Last year I got a message from a young black man that said he grew up on my music. It blew my mind to realise that I could influence boys with my art the way other rappers influenced me.”

“So here it is, Ima give you what the doc never gave me. Welcome to “DETOX”, dedicated to teenage Micah, and  all Black boys trying to figure out how to thrive in a nation designed for us to fail.”

Raised on gospel music and gangsta rap, he doesn’t shy away from paradox and the difficult realities of being Black in America.  His work touches on themes of culture, justice, and faith. Over the past decade, he’s partnered with non-profit  organizations and performed at concerts, conferences, and universities  all over the globe; India, New Zealand, France, Rwanda, Hong Kong and more. He is the author of a poetry collection titled  “Here Comes This Dreamer”,  and has released albums in many genres including folk, blues, spoken word, and his first love, hip-hop.