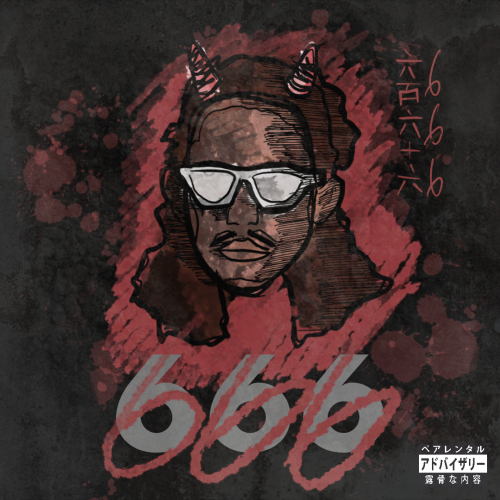 In this new entry in our ‘Diamonds In The Rough’ category, we want to introduce you to upcoming artist Nicco Homaili and his brand new single titled “666”.

Breaking out behind the scene from his producer moniker as SOLD , rapper/singer Nicco Homaili sculpts new sonic boundaries with sounds coherent to his dark and provocative lyrics. His Hip-Hop/R&B masterpieces are built upon layers and layers of synthesized instrumentation and vocal textures that can be considered newfangled amongst the newschool hip-hop genre adopted by many in the current era. In most works, perfectly glued to and complimented by banging 808s and fat distorted basslines, his lyrics are literatures posed as self-representations of himself and as mirrored reminders for an individual living in a fast-paced society where music is often overlooked and disregarded.

This perspective indirectly co-relates to his day job in architecture while his music is a direct translation of his social thoughts during the after hours. His music are beautifully tenebrous and are intended to evoke self-reflection and persona-realisation particularly when volume knobs are raised during a late night drive. Garnering influences from the likes of new-school Hip-Hop/R&B artists such as Amir Obe & Eli Sostre , Nicco Homaili does not only mean strongly and sincerely when it comes to word-for-word in his lyrics but also creates nebulous sounds and textures through his beats that are collectively personal products of his somber yet phosphorescent character during the wee.

As an unsigned artist, Nicco Homaili has accomplished the extraordinary feat of having his music make deep inroads into the charts – organically. His 2018 single “Doppelgänger” debuted at #47 on the Spotify New Music Friday International chart and was a hit on the respective Singapore, Malaysia, Japan, Indonesia, Philippines, Thailand and Taiwan charts. That same year he released his critically celebrated debut album Late Night Doppelgänger , which spawned a slew of chart-blasting anthems: “Trust No One” (Singapore Viral 50, #20) , “Dots in a Dot” (Spotify Beats & Rhymes) and “Trust No One” (MTV Asia’s Big Chill) . In an overcrowded market and against hostile odds, Nicco Homaili’s music has blazed a niche that has earned him fans in multiple territories and markets. His story is, in the best, purest sense, a triumph of substance over flash, longevity over transience.