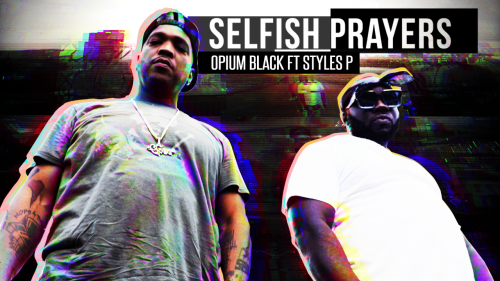 In this new entry in our ‘Diamonds In The Rough’ category, we want to introduce you to upcoming artist Opium Black and his brand new single titled “Selfish Prayers” featuring Styles P.

Opium Black, Hartford Connecticut’s own and arguably New England’s dopest hip-hop artist, is ready to assume his place in the Canon of Hip Hop’s greats. He was born in Brooklyn, New York into a West Indian, musically inspired family. From this family comes the founding members of award-winning reggae band Morgan Heritage.
Leaving Brooklyn at a young age, Opium Black relocated with his family to Hartford, Connecticut and his long-standing love affair with the streets was born. He actively pursued his musical ambitions, even being courted by record labels like Blunt Records and Def Jam. As was the fate of many young black men, who found themselves fully immersed in street activities, Opium was arrested, and served a six-and-a-half-year bid in federal prison.
Armed with his freedom and a new focus on his musical ambitions, Opium started again from the ground up with Full Eclipse / NuBankEra. He started releasing mixtapes and enjoying local and national airplay, with a series of indie singles and remixes. These efforts also generated a professional relationship with Bungalo/Universal Records. This led to single releases like Out Da Hood, produced by the Grammy-winning production collective Basement Beats (credits include Nelly and Diddy).

More Opium Black music is on the way via NuBankEra. Opium is hedging on the masses gravitating towards his savvy blend of Shotta Rap.