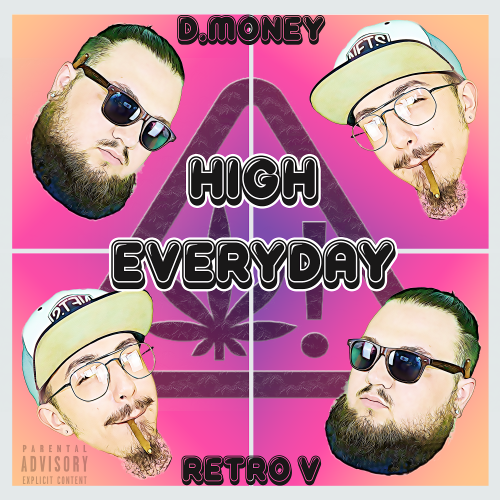 In this new entry in our ‘Diamonds In The Rough’ category, we want to introduce you to upcoming artist RetroV and his brand new single titled “High Everyday” featuring David Money.

Arriving on the scene with an old-school style, Indianapolis-based rapper and producer Retro V combines a very fluid flow, playful rhymes, a stoner rapper swagger and hypnotic production influenced by Wiz Khalifa, Mac Miller, Snoop Dogg, Logic and Curren$y. His debut single, This Morning, was released in March of 2017 and featured professional recording artist, Mark Battles. This became the headlining track on his first mixtape, Retrobution. Retro V followed up his first mixtape on October 2018 with the release of the EP Vendetta which featured one of his most popular songs, Make a Play. In 2019 another single, The Last EMCEE, was released leading up to the latest release of the EP Retro Pacino in August of 2020.

Born Trevor Joseph Rivera on January 19th 1995 in Indianapolis, IN, Retro first used the alias Young Prodigy, a name referenced in his early instrumental production days. It wasn’t until he first started spitting rhymes when he started using a new alias, Retro V, which is an anagram of his government name Trevor. His first attempt at committing lyrics to paper was around age 14 for a school project which led to his interest in producing instrumentals on his school laptop in high school. After high school he took his talents to the next level by enrolling in Azmyth’s School of Music Technology in 2016 for beat production and engineering where he discovered his passion for recording arts.

Listen to “High Everyday” below: